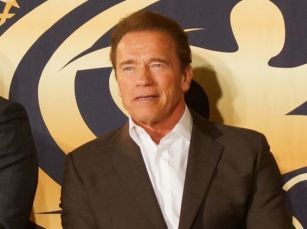 Fitness |  Products |  Thrift Etiquette |  16.03.2015
After a year of fluorescent colors shocking the system at the Arnold Classic, basic black is back. The majority of the hottest fitness and casual [...]

After a year of fluorescent colors shocking the system at the Arnold Classic, basic black is back. The majority of the hottest fitness and casual clothing here has a biker meets Game of Thrones vibe: heavy on shields and tough text – as logos or words of inspiration. 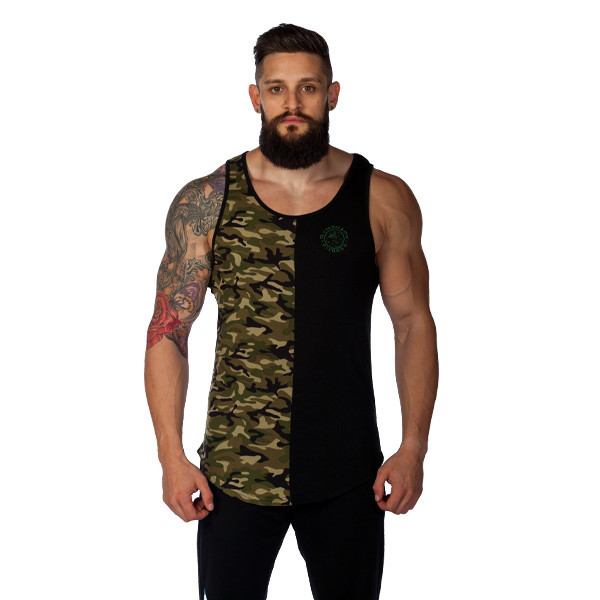 Gymshark’s black/camo tank was a hit at the Arnold Classic.

Some vendors went all out with their booths to catch  the eyes of  more than 175,000 people who come from all over the world for the four-day festival in Columbus, Ohio. Making the biggest splash here:  Gymshark.  They created an elevated red carpet experience where visitors could pose with familiar faces like The Hodgetwins,  YouTube and Instagram sensations. Gymshark has re-imagined the tank top, with a variety of two and three-toned designs, with black or white and a muted color or camouflage, for $30. 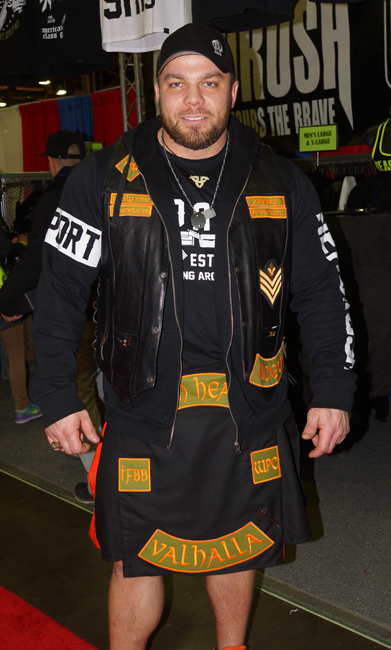 Former Mr. Canada body builder Mike Johnson sported a kilt during the festival as he worked the Headrush booth.

Headrush’s slogan,”Fortune Favours The Brave” makes for some smart t-shirts.  The company also features Native American inspired accents, and the brand is endorsed by the popular Canadian bodybuilder Mike Johnson who sported a kilt throughout the festival. 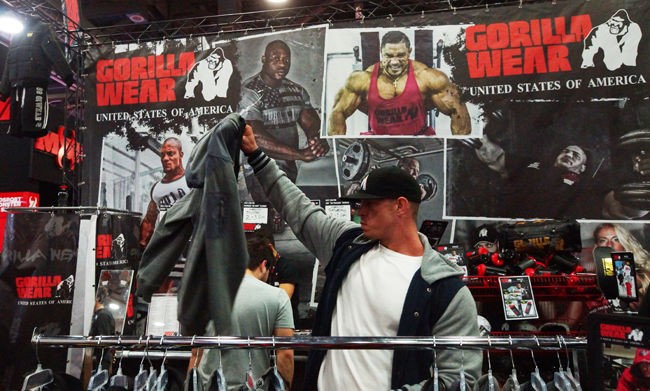 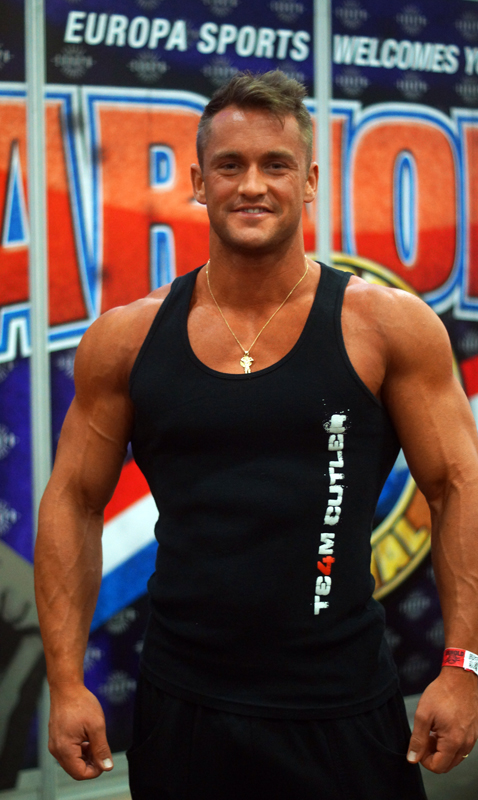 Many of the fitness celebrities proved that with the right physique, a simple black tank top can make a strong impression, like  legendary Powerlifter Mark Bell and Swiss bodybuilder and fitness model Stan Imal. 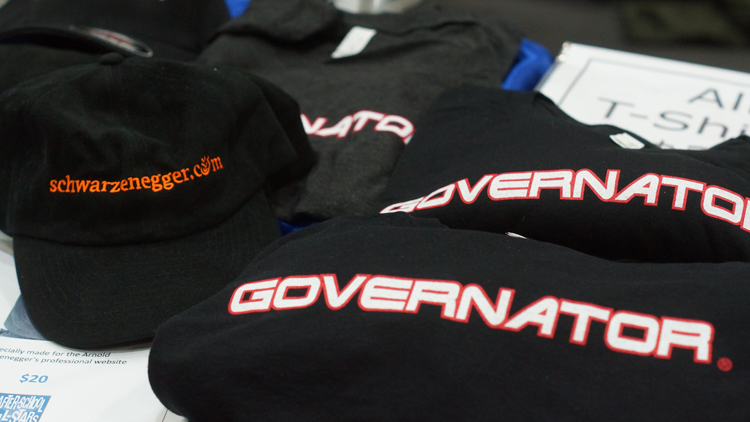 Some popular items here  include black tshirts emblazoned with “Governator,”  in honor of the festival’s namesake, Arnold Schwarzenegger. The sports and movie icon usually dons fancier duds for his appearances, typically a blazer and crisp dress shirt without a tie. His Expendables co-star Randy Couture wore a leather blazer and jeans while Michael Jai White rocked a smart custom black brocade blazer by Gentleman’s Cooperative. 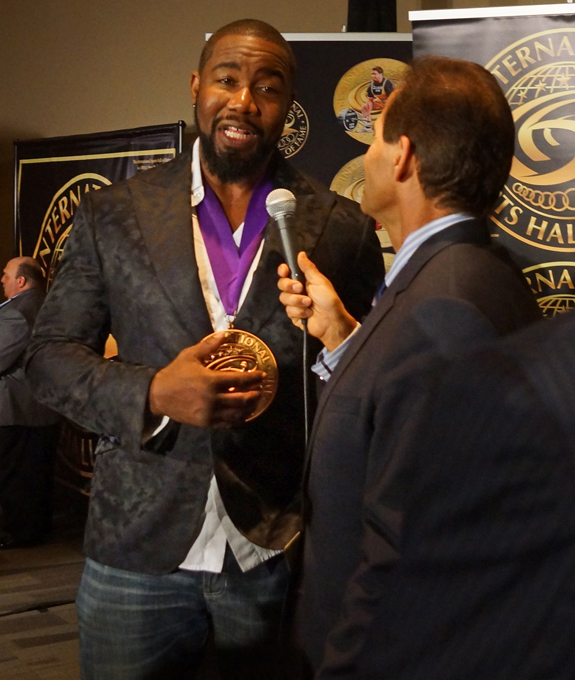 Michael joined a group of best dressed athletes inducted into the International Sports Hall of Fame, including wrestler Paul “Triple H” Levesque, powerlifter Ed Coan, body builder Lenda Murray, kickboxer and movie star Don “The Dragon” Wilson and boxer Evander Holyfield. Presenting the awards was another best dressed fixture at the festival, Dr. Robert Goldman, founder of the hall of fame. When Arnold came to the podium, he ribbed “Dr. Bob” for his impeccable bespoke suit and tie. “You look studly!” Arnold said, encouraging the crowd to applaud. 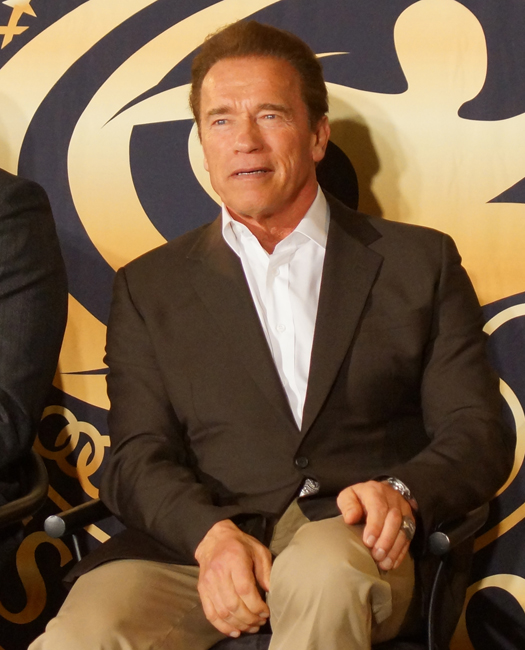 Namesake Arnold Schwarzenegger usually is spotted in a blazer and crisp dress shirt at The Arnold Classic.