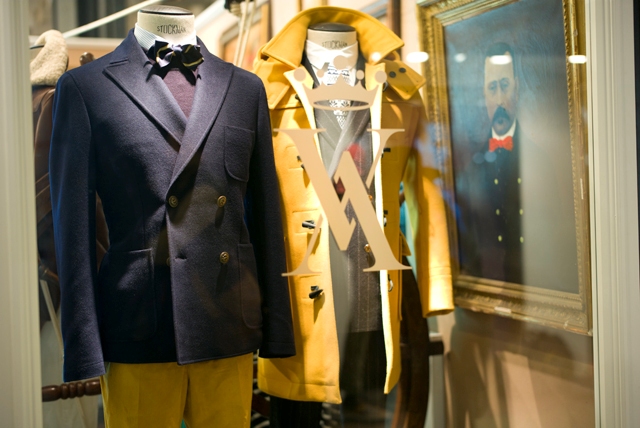 If you ever wanted to know what the French acronym BCBG means in fashion lingo, now you know (not to be confused with CBGB the old punk rock haunt of Ramones legend in NYC, or BCBG Max Azria, a female fashion brand): it stands for Bon Chic Bon Genre (Bon Chic = good elegance/style & Bon Genre = good class/manners, but, in double entendre, also ‘the right kind (of people)’) which, for purposes of talking about the interesting, fresh, and elegant style of Vicomte A., we are going to translate freely as either ‘preppy, upper crust, upper class, or gentry’.

We all know the look very well:  It’s that polo, hunting (not fishing), horse & yacht racing look often copied and woven into the fabric of elite global institutions of higher learning who have appropriated it as the trademark, and the introduction, of what is claimed to be a superior education and Preparation (‘preppy’ as in ‘preparatory school’) before real pitfalls and rumbles of life commence – even inside the doldrums of High Society. It is that collegiate look, in which a tie (or the colors of the stripes thereon) or a butterfly around your neck becomes a tool, not to succeed in dress-for-success business meetings, nor to simply show your fashion for the sake of pleasure or style, but to set yourself apart – and distinguish yourself – from other levels & classes of society, assuming others’ values are different from yours, not even mentioning the quality of taste of others’ fashion: because not everybody is equal! 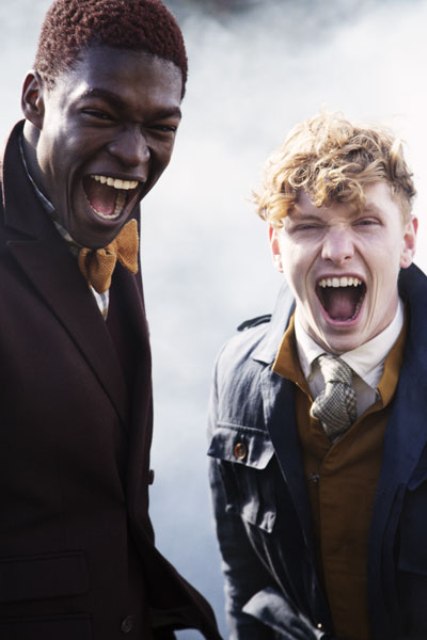 So which a grand idea indeed to make this type of exclusive high society style (Vicomte A. has its origins in Paris and Palm Beach) available to all people and to the general public at large, ready-to-wear, ready-to-buy, and in the grand array of all the effervescent colors siring the rainbow! Back in the sixties it was precisely this power that Yves Saint Laurent harnessed by ‘democratizing’ fashion with prêt-à-porter, the ready-to-wear, in a time when both sex and rock ‘n roll (and also fashion) conspired for the great universal brotherhood and equality of mankind; so why not also make the preppy collegiate look available and accessible to everyone: superior ‘gentry’ style for the masses and affordable to all, in many bright colors, in many different forms & patterns, and of course not without the odd accessories to go along (hmm binoculars maybe).  Because not just every look comes with so many values or pretensions! 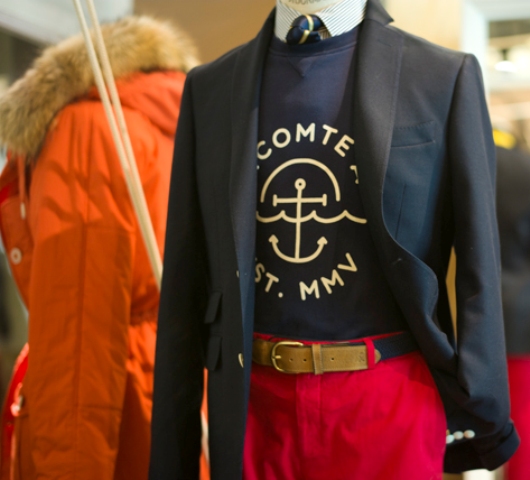 So do allow me, Sir, to wear this hunting jacket, even though I do not own any hounds; and please I would also like to have that bright yellow parka, so that I may impress my friends with my own importance despite not visiting any races; and, for esthetic pleasure’s sake, also, please, that college scarf, it is no ordinary Scottish square I presume that pattern, but verily a checkered ‘Prince de Galles’ (Prince of Wales), is it not, and by all means not to be confused with an ordinary boring ‘brownish’ Burberry I hope?  Ah, a real Vicomte A., you say – the French answer to (Polo) Ralph Lauren and Paul & Shark; but you still won’t find me in the Hamptons, in Newport, or Gstaad, Switzerland, for now, mind you; I will just wear all of this on the streets; the streets of my small provincial town. For I am not Jay Gatsby; and I like to be stylish, but not so preppy! 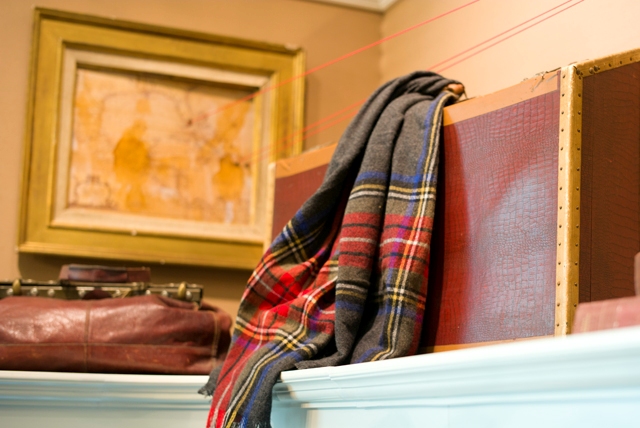 Thus Vicomte A. is a very interesting, successful, and young & fresh French fashion company founded in 2005 and managed well by viscounts Arthur de Soultrait and his brother Marcy. The brand has many stores world-wide in upper crust locations and the brothers made good use of branding their aristocratic title for a global audience while creating a multi-effervescent colored style of high-line high class collections made available and accessible to the public at large. Like at Ralph Lauren the original colors and styles of Vicomte A. originally hark back to the sport of polo, but also, in lesser extent, to ‘hippique’ (horse racing/riding), hunting, and yachting. Yet the colors used are much brighter than in the Ralph Lauren collections; this must be that famous Paris light effect of which Parisian painters spoke of old. The style of the collections can be considered as‘chic’ (VA’s motto is ‘l’instinct chic’, the chic instinct) but probably a little more sporty and casual (décontracté in French) than Ralph Lauren, perhaps a little bit closer to the collection of GAP, but of course, not nearly as ‘common’. BDMOTP would call it sporty, collegiate, yet fresh & elegant. 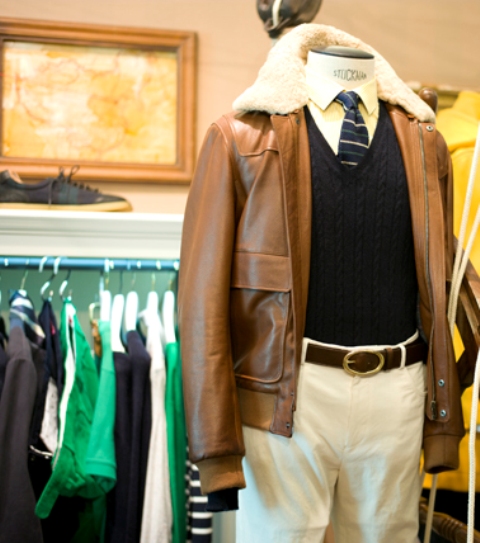 So to finish off this ‘colorful’ essay on collegiate wear for the upper classes now available to the masses thanks to Vicomte A., of course BDMOTP would not let fashionistas off the hook without a fine (mass marketing) sample of some of the sophomoric behavior and taste which every now and so often inadvertently seems to accompany the global elite on their travails, long-sufferings, travels and behaviors.  Benetton does it and is well known for it.  Abercrombie & Fitch thrive on it, and even have a budget for it in case it leads to lawsuits.  Calvin Klein pioneered it.  And so Vicomte A. apparently does it every once in a while by throwing a party:  it is called shock or scandal marketing for the very reason that it can never be considered real branding. A most royally colorful assembly indeed! 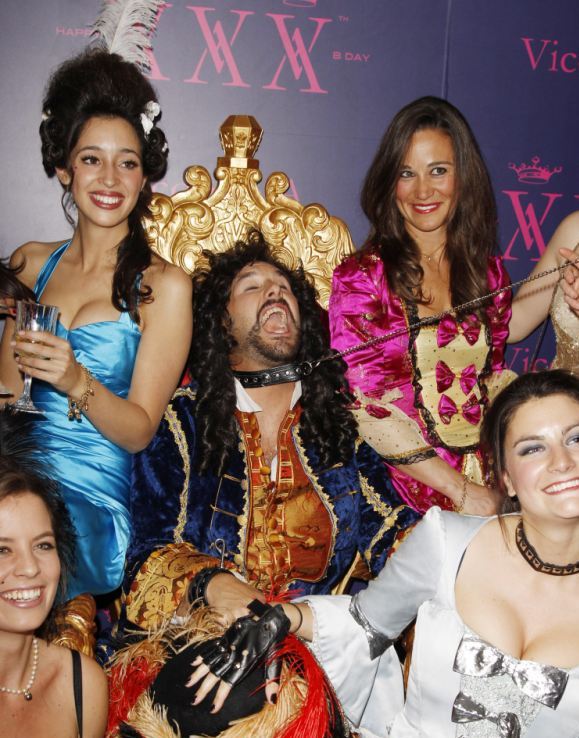 Voici Monsieur le vicomte Arthur lui-meme, during the bash for the 7th anniversary of Vicomte A. in 2012. And here, perched above his left shoulder, we see Pippa Middleton – related to British royals, but not by blood – dressed in the very same pink colors as the bright anniversary pink of the Vicomte A. house brand. So scandalous, so naughty, so bad!

Back in the 17th century Monsieur le vicomte would probably have been imprisoned (‘embastillé’ in French, as in ‘sent to the Bastille’) for ‘lèse majesté’ (co-optation of royal prerogatives, of the royal pearls and insignia, while not mentioning the perversion of  the royal court’s morals as a serious crime because this type of offense was better left to be pursued by ‘lettre de cachet’) in much the same way as Nicolas Fouquet, the first French minister of Finance, was imprisoned for life by Louis XIV after simply daring to build a more beautiful chateau and garden (Vaux-le-Vicomte) than the Sun King had ever owned himself.

And so today, 350 years later in our contemporary climate of global buzz marketing & instant publicity, anything with a direct mass appeal to popularity and your ‘number of likes’ is allowed: Voila Vicomte A.: because it is good to be the King!

Posted by Sandro Joo and photos by Yulia Gromova.

One Response to Vicomte A.